In 2022, we started exploring our new home state, Tennessee.  We decided to take a short one week trip to see several state parks and one national park.  Can you guess which national park it was?  There is only one in Tennessee.

Our son, Justin, also lives in Chattanooga, and he wanted to try an RV, so he rented a smaller RV and camped with us.
​

The most visited Tennessee state park is Fall Creek Falls.  It turns out that it is close to where we live, so we made it our first stop.  Actually, Jennifer and I had visited it between Christmas and New Year because we wanted to get to know some of the park features near us.  We drove through the campground and felt it would make a good first stop.

The falls are quite high, about 256 feet tall.  They are easy to access, as there is a road that takes you to within about 100 yards of the falls.  Of course, we didn't stop there and took the trail from there to the nature center.  This was a great thing to do, as you reached the nature center by crossing a suspension bridge above the Cane Creek Cascades which were as much fun to see as the Falls.  The nature center had a small but very nice display of history and park features and we were glad we took the trip even though there were a LOT of stairs to climb.

The Fall Creek Lake is above the falls and created by a dam.  Only non-motorized boats are allowed on the lake so it is very peaceful.  Justin tried a little fishing there but couldn't convince any fish to grab onto his hook.  We took our Folbot along and decided to wait for the later parks but we could have used it here.  As it turns out, we didn't use the Folbot in the other parks either, so we should have used it at Fall Creek Lake.

We also viewed Piney Creek Falls, which were much smaller and farther away, so we will get closer and explore them the next time.

The Mountain Laurels were in bloom so we enjoyed viewing them along the trails and along the roads. 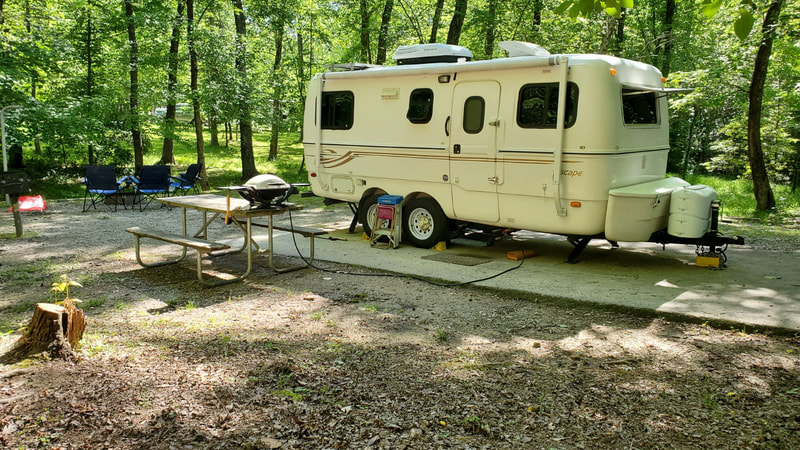 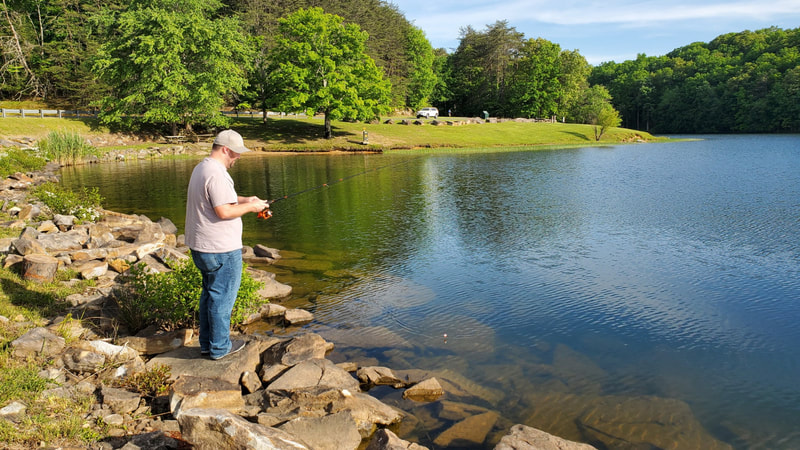 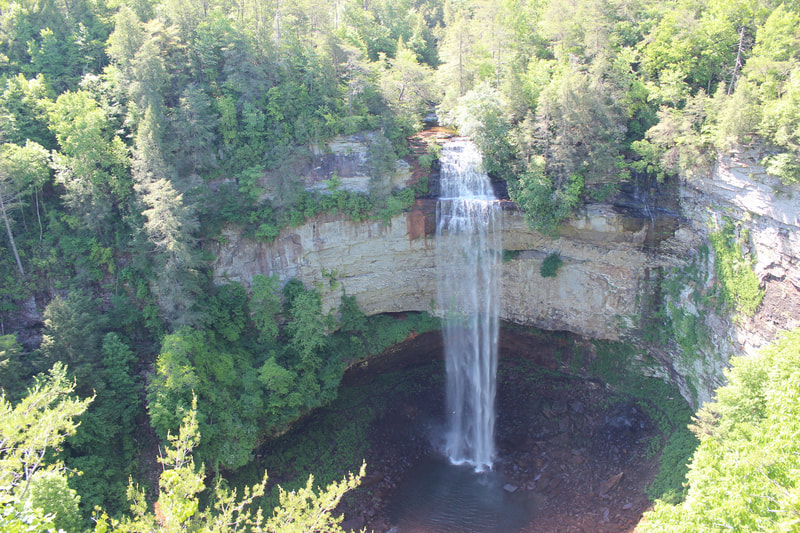 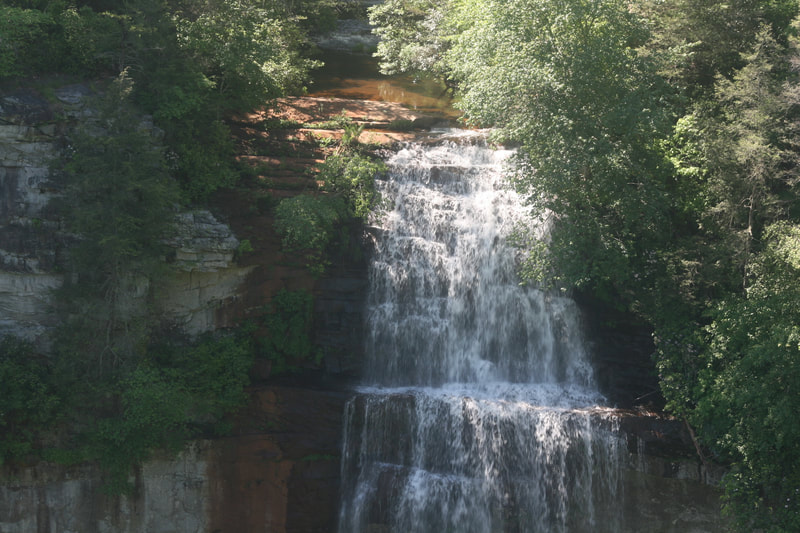 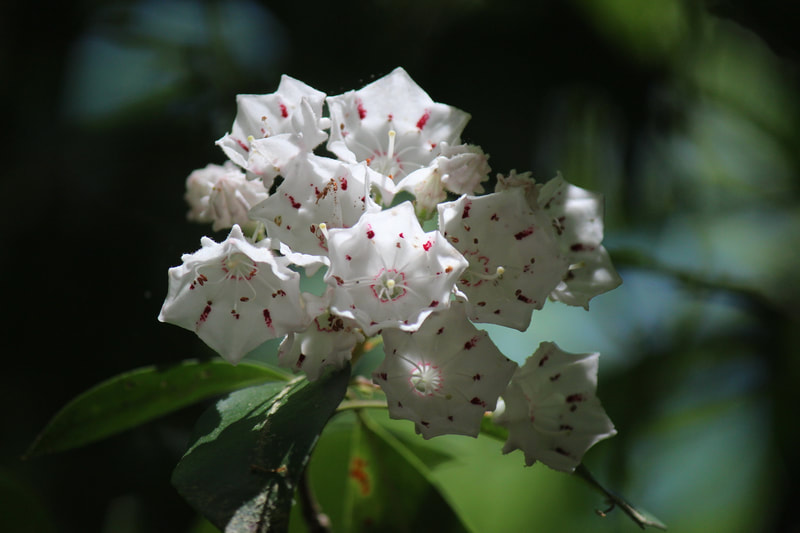 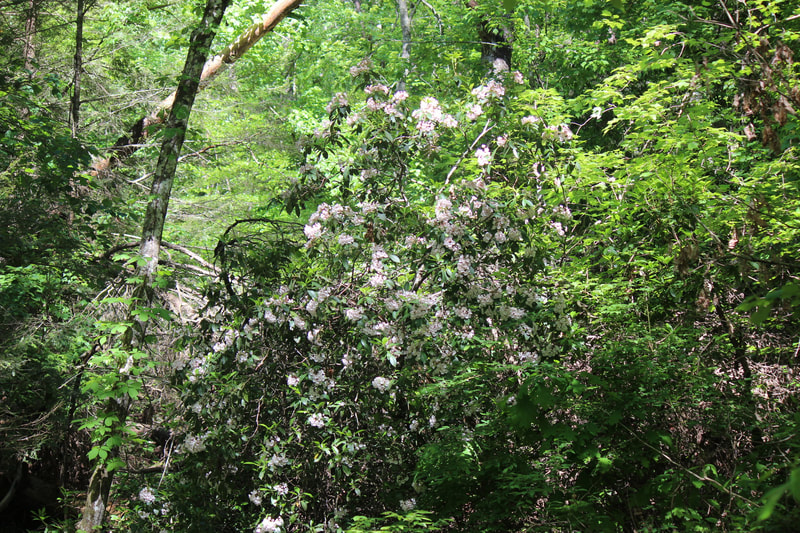 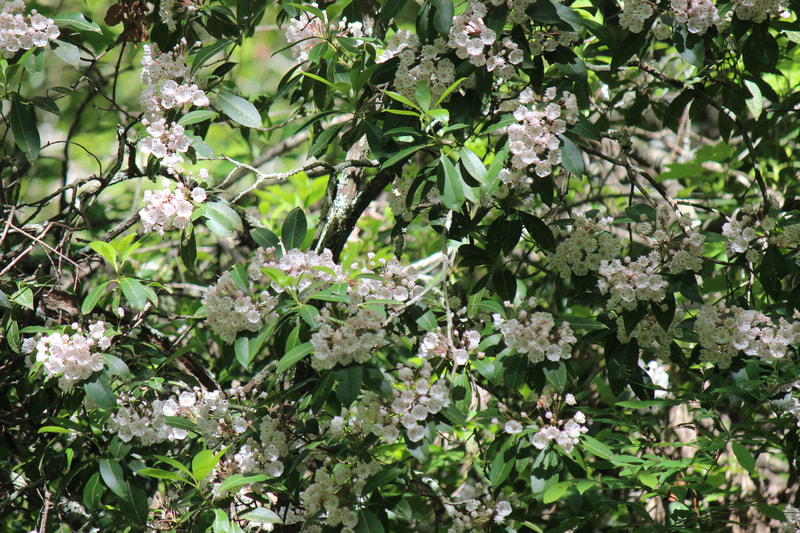 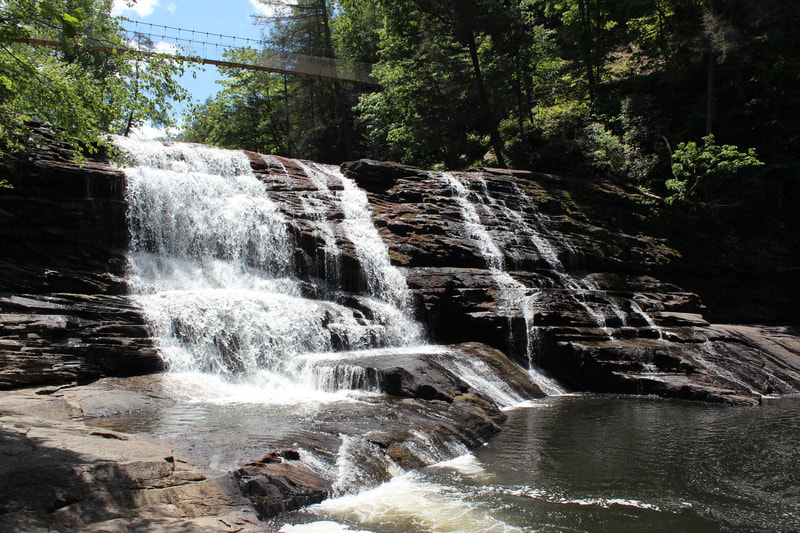 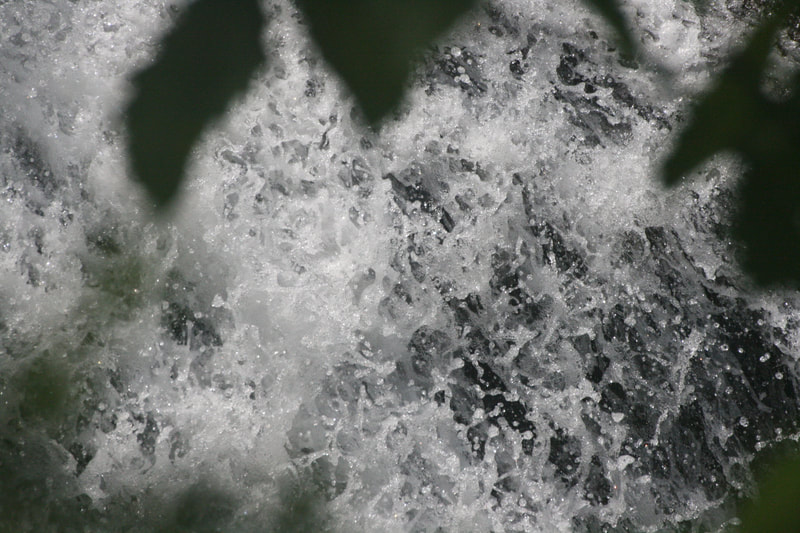 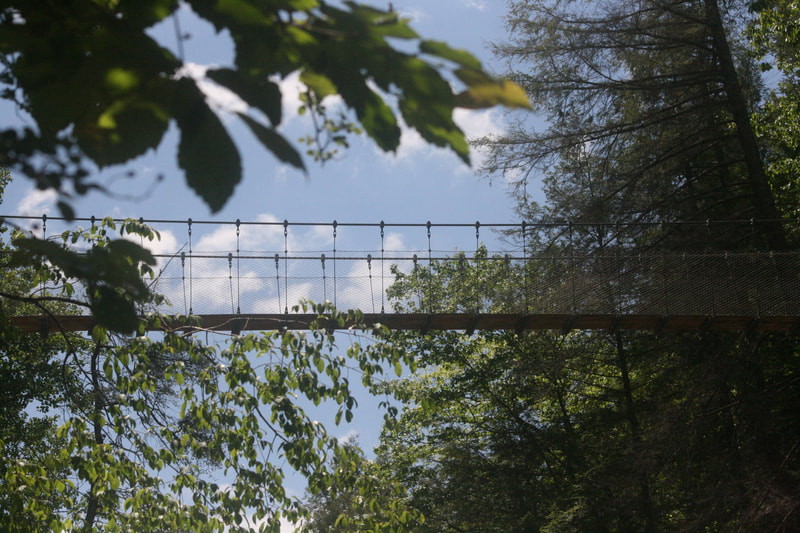 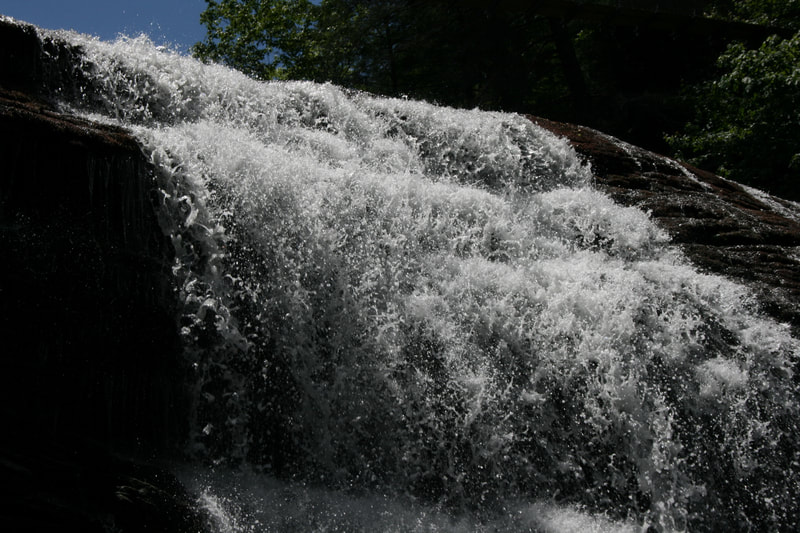 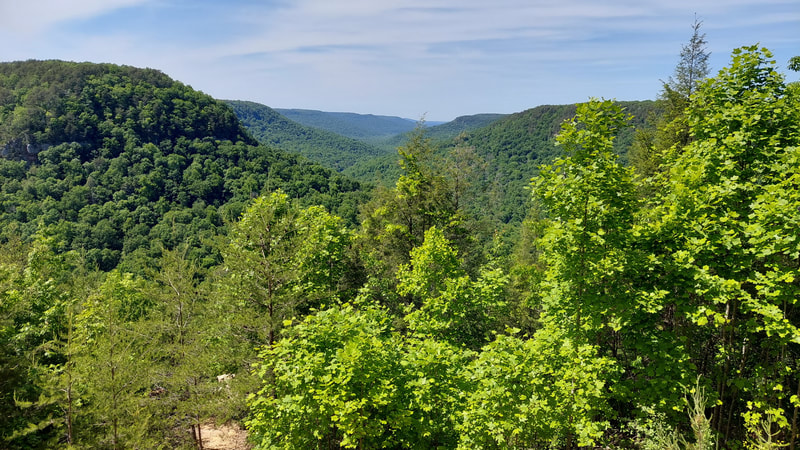 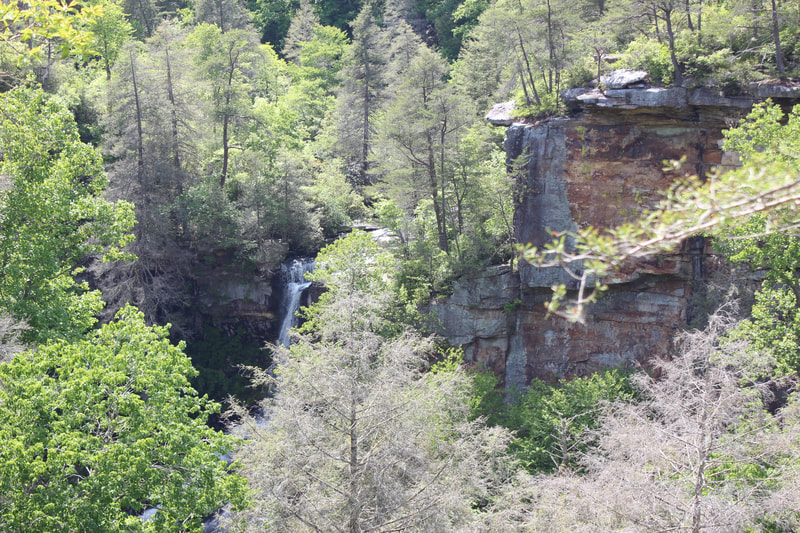 After Fall Creek Falls, we went to Norris Dam State Park where we stayed in the East campground.  The park website indicated that the East campground was in a field under power lines, but that was not really true.  Yes, the power lines from the dam power plant did go across part of the campground, but I wouldn't call it a field.  Our sites, 15 and 13, were around the outside of the loop and backed up to the forest, so they were not under the power lines, and were quite nice.

Norris Dam was the first TVA dam.  It formed the Norris Lake, which is large, like 53 square miles of area!  There are four state parks around the lake and many cabins and marinas.

At the state park, there is a museum and several preserved buildings.  The Lenoir Museum was great.  It is a collection by the Lenoirs over 60 years.  Much of it showed what their lives were like.  We had a special treat while we were there.  Their son was attending a presentation and we got to talk with him and hear some of his stories about growing up with the artifacts shown.  We were very lucky to have met him.

After hiking around on the first full day, we had planned to spend the second day on the lake but it was so hot that we decided that would not be enjoyable, so we went to Oak Ridge to the American Museum of Science and Energy, which told the story of the development of the atomic bombs and then what Oak Ridge labs have been involved in since then, which largely revolved around nuclear and other energy technologies, and uses for nuclear products other than bombs, such as nuclear medicine.  Five stars. 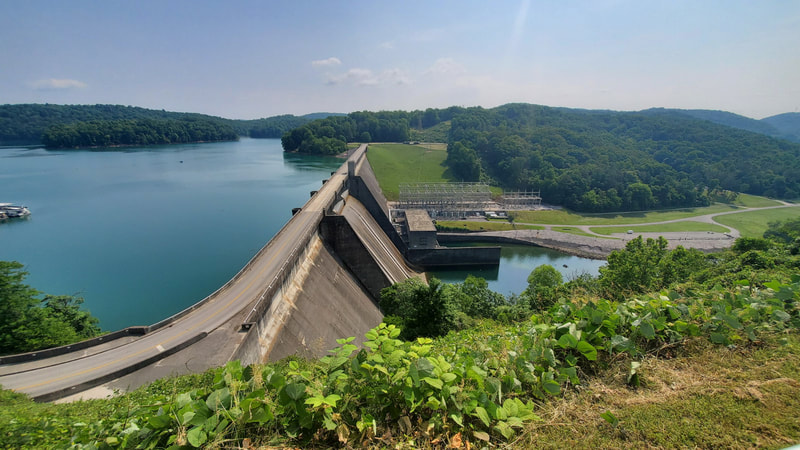 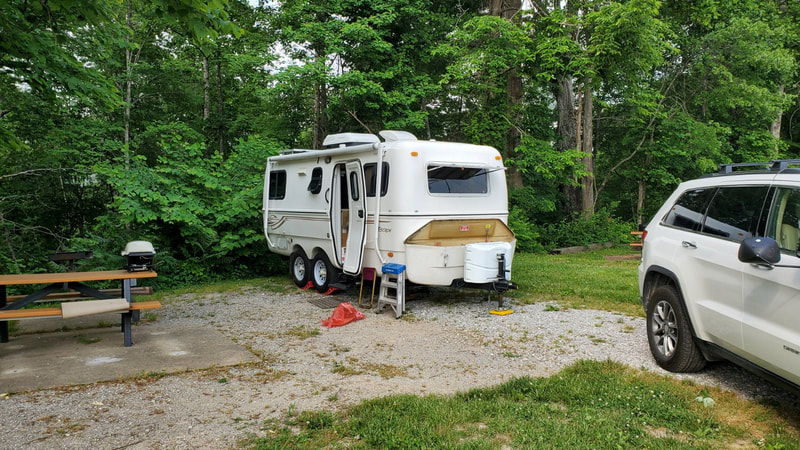 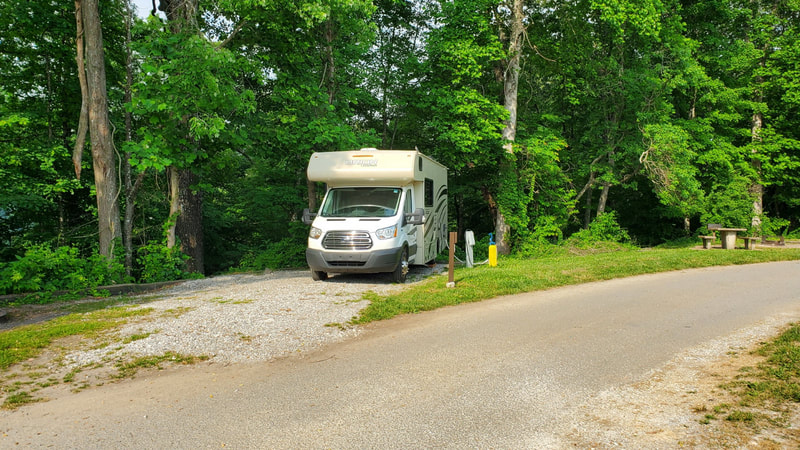 After spending five days with Justin, we said good bye to him as he went home, and we went on to the Great Smoky Mountains national park.  We camped in the Cades Cove campground.  After five days of having great cell phone reception, we went off the grid.

We had not been to Great Smoky Mountains NP for decades.  Since we arrived at Cades Cove campground, we first explored Cades Cove.  It is a flat area that used to be farmland.  Now there is a loop road around the cove that goes by the remains of the farms.  We went to the visitor center and then saw the village there.  Then we continued to drive around the loop road.  On the way, we collected firewood and saw some wildlife: three bears, and turkeys.  You cannot take firewood into a park but you can collect any downed wood.  Our only problem was that we didn't have any newspaper with us to start the fire.  At the camp store, they had these little firestarters made by Duraflame that worked.  The price in the park was 1/3 of the price we paid at Norris Dam, or less than $1.  We will have newspaper on our packing list next time.

Back at the campground, we were visited by a flock of turkeys moving through.  The male was keeping guard while the females ate.  He was quite the large guy.

Next day, we went to the Sugarlands visitor center, then headed up Newfound Gap Road.  When we reached the gap, we went to Clingman's Dome, the highest point in the park at 6643 feet.  There is a large parking lot, then a half mile paved trail to the dome.  You would think a paved trail would be easy, but this was a steep trail.  Up we went, then we walked up the observation ramp to the lookout.  It is above the trees so you get a panoramic view of the park.  Fortunately, it was clear so we could see for miles.  Then we went back to our car just in time to beat the rain.  We continued on the Clingman's Dome Road to the southern visitor center, Oconaluftee.  We returned to Newfound Gap and took the time between rain showers to view the eastern half of the park.  At this spot, there was a large Buckeye tree in bloom, the first we had seen since Ohio and Michigan.

The weather forecast was for more rain for the rest of the week, so we returned to our campsite and built a fire, which was a good thing since it started raining again but not before we were able to enjoy the campfire.  Since the forecast was for rain for the rest of the week, we decided to break camp a day early and return home.  There were several interesting loops to check out but they will have to wait for our next time. 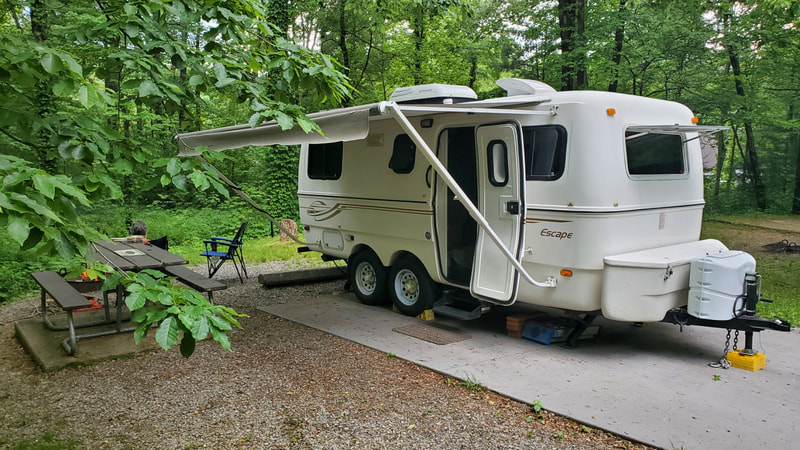 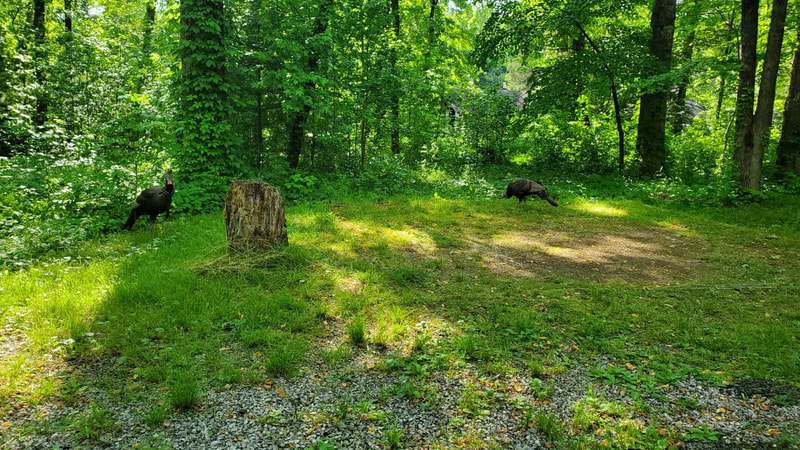 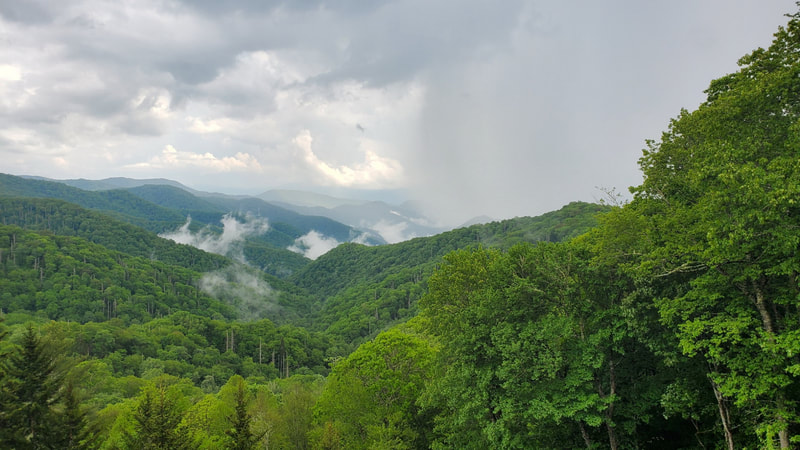 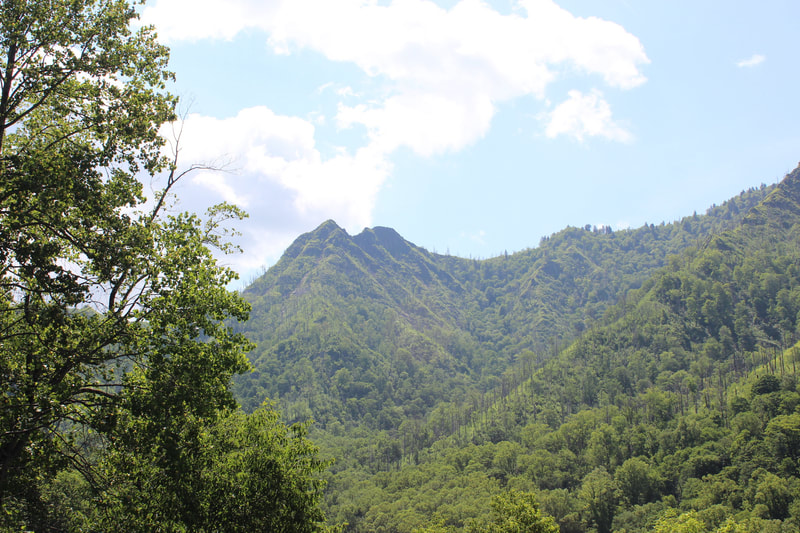 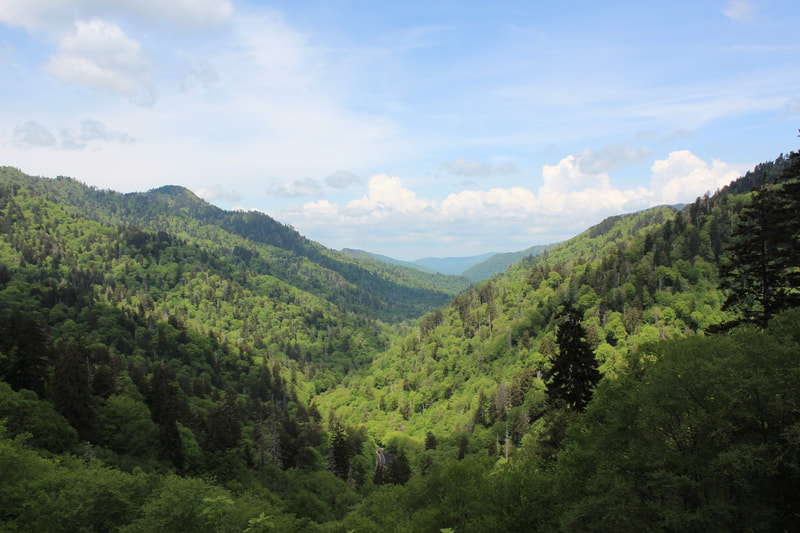 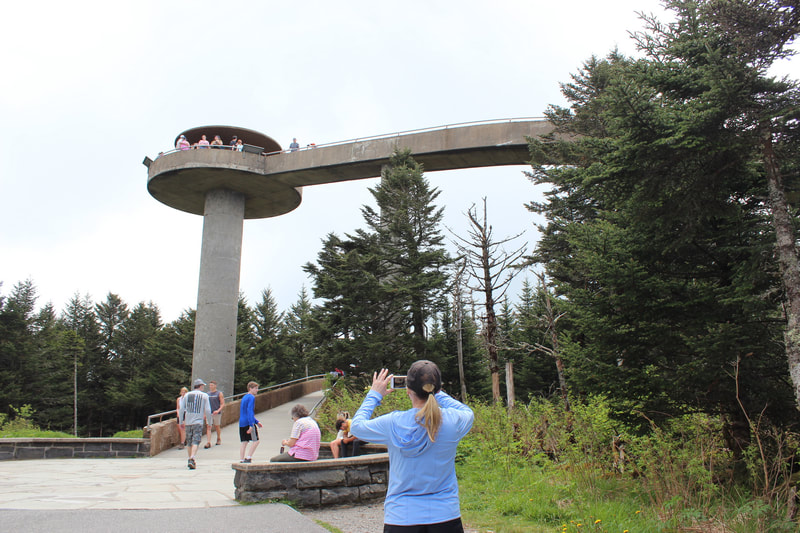 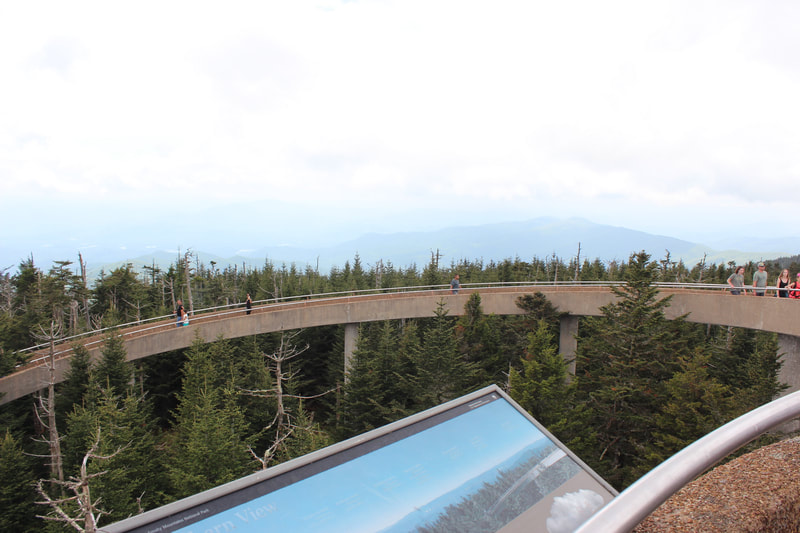 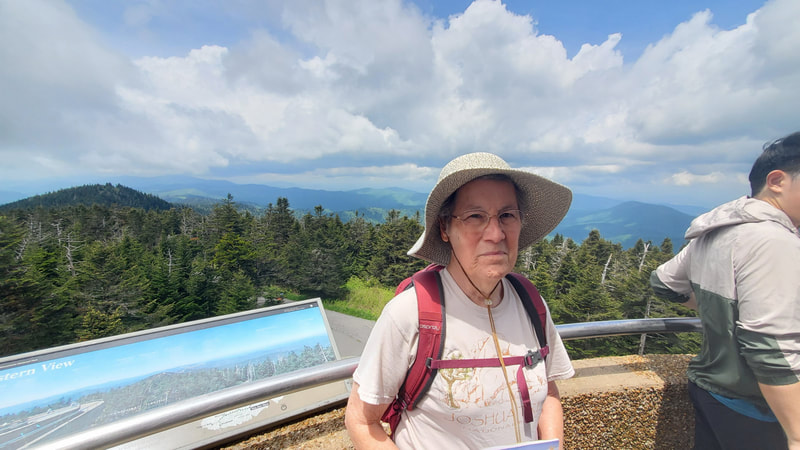 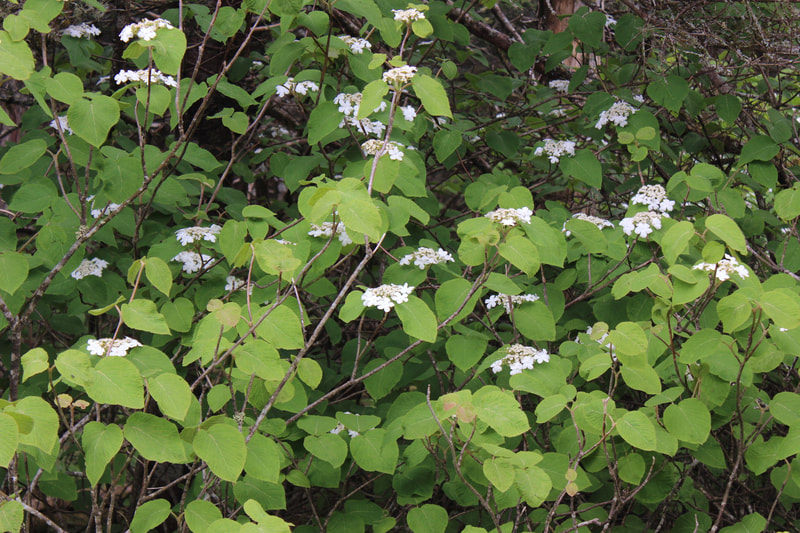 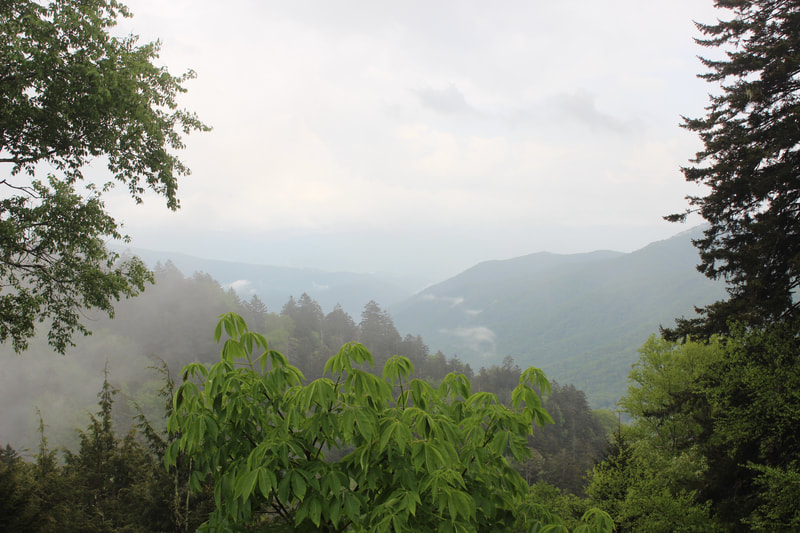 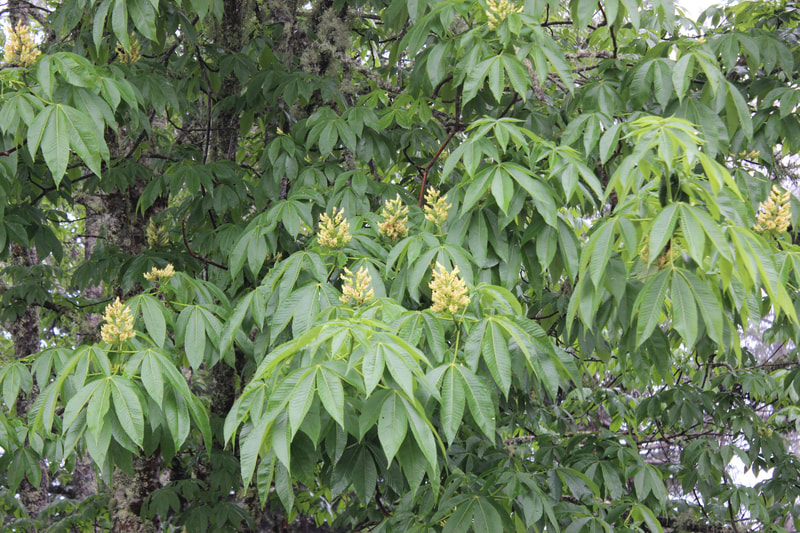