So what does that mean?  We can create a network for data (anything with an IP address or transport) using frequencies that are for radio amateurs separate from public frequencies.  For example, there is a set of frequencies adjacent to the popular Wi-Fi frequencies that are available just to us hams.  We can build a private data network for our use, which could be for emergency or service communications.  For example, when the Internet goes down, we can use our network to provide communications such as contacting relatives or friends, or supporting emergency purposes such as hospitals or police or fire.

This network operates using the same protocols, TCP/IP, that we use on the Internet, so it can do the same things like exchanging messages such as email, or voice over IP using an "IP phone", or video, or anything else you can imagine we use the Internet for. 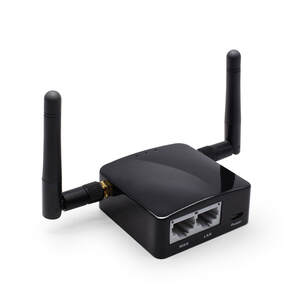 I had heard about AREDN a while ago and considered dabbling in it but never found the right time or need.  Well, I still have no need but we prepare for emergencies without knowing the specific need in advance.  I discovered that I had a router that I was not currently using, a GL-iNet GL-AR300M16-ext, that could be used for AREDN, so I loaded the firmware onto it.  I explored the map of AREDN nodes and found several near me in Chattanooga.  My little device just has two small antennas and wasn't going to communicate with any of these other devices, but AREDN includes a "tunnel" capability that supports connecting to the AREDN network using the Internet, so we can test things out without having a real AREDN network using just our radios.  So I contacted one of the local hams and he gave me the information I needed to connect to the AREDN network using the tunnel.
My node is AA6BD-AR300M-707-CHA.

​Where am I now?  My router is tunnel connected to the Middle Tennessee (Nashville) network.  I can see and communicate with the other nodes.  So not so much.  I plan to add a remote router on top of my planned mast supporting my other antennas that can communicate via radio to my little router, and also to any other node that is able to reach it.  It may not be any other nodes immediately, but maybe we can grow this local network much as has happened in Middle Tennessee.

I have a router that is capable of running the firmware but we are currently using it for remote Wi-Fi while camping and I don't think I will mess with it.  But the hardware is so inexpensive that I will get a similar setup and try it out.

I saw a YouTube video ( https://www.youtube.com/watch?v=CCF8r236yiA ) on how to send and receive emails using the Winlink system over a "peer to peer" AREDN connection, so that will be something to try.
Copyright © 2023 by Dornbush Web Design